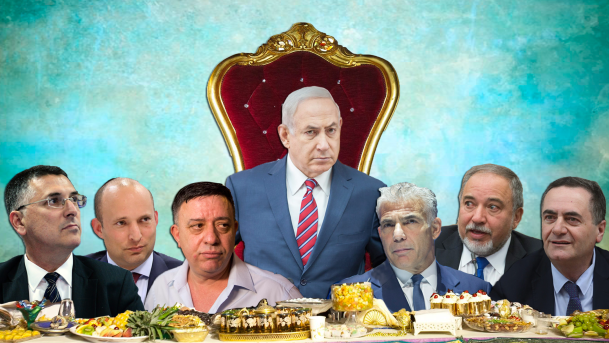 As we head into the new session, here are six burning questions whose answers will make or break the Knesset. Will the coalition survive another session? Give Kalpi a like on Facebook and click on the follow button on the right to get updates on these answers to your email. Contact Kalpi at kalpiblog@gmail.com. Click here for the Twitter machine.

The Prime Minister is involved on different levels with three different ongoing investigations (eat your heart out Donald!). He understands the trouble he faces as recently he attacked the police and specifically its media advisor for leaks regarding those cases. While it seems that Netanyahu would not step down if he is indicted, that would certainly create significant political pressure that would limit his power. In the meantime his party is working to ban sitting Prime Ministers from being investigated, something that in no way seems fishy.

It may happen if: A state witness flips the investigation, though it hasn’t happened yet.

Or maybe not: If the investigation drags on. They haven’t gotten him yet, right?

Since Avi Gabbai overcame the fact that he was barely a member of the Labor party to win their primaries, Labor has received a boost in the polls. Gabbai has also convinced the party to give him more power including the selection of parts of his party’s list for the upcoming election. At the same time, some prominent Labor members have left since the primary and no doubt some others are unhappy being led by an outsider. Recently, Gabbai got in trouble for statements made about peace negotiations that were viewed as too right wing (though it is confusing as to why exactly, read Tzipi Livni’s “critical” quote in the article…it’s the same position).  At the same time, Meretz, a potential threat to take some leftist voters is in disarray.

It may happen if: Labor keeps a steady 20+ in pre-election polling.

Or maybe not: If other members of the party leave and/or a new center-left party forms.

Until the Labor primaries Yesh Atid was sitting comfortably in second, but since, they have fallen behind. Yair Lapid has been campaigning furiously throughout the country and has taken to needling Gabai showing that he understands that he’s competing with Labor for voters and not with fellow centrist party Kulanu (more on that later). Lapid’s advisors have certainly also informed him that voters tend to move from third parties to primary parties (Likud and Labor) as elections come closer posing another threat to Yesh Atid.

It may happen if: There are bad signs for Labor.

Or maybe not: If there are good signs for Labor.

Moshe Kahlon’s party has delivered a series of laws and Finance Ministry decisions that have directly benefited lower and middle class families including tax cuts, day care price drops and regulations and even signs that the housing market may finally be starting to normalize. He even got to put Yesh Atid’s souls on “Ether” as he read off their platform showing that he achieved what they failed to in the previous Knesset. In return he has received….well, nothing. There is no palpable sign that Kulanu has received any boost from these measures. If they can’t convince voters they may struggle greatly during the elections. Recently, the party took a coordinated united stand against Bibi’s attack on the police as a way to raise their profile.

It may happen if: Kulanu appears more in the headlines.

Or maybe not: If everything stays exactly as it is.

After the previous elections, the national religious party complained that that the Likud had stolen about 5 mandates from them. This was strange as the entire point of elections is to get mandates from other people. HaBayit HaYehudi then set off on a strategy of outflanking the Likud on the right to prove that they’re the real right wing of Israel (ironically, the same strategy as Meretz from the opposite side of the aisle). They since have gotten a bump in the polls suggesting that they are succeeding. The problem is that the party itself is experiencing a similar problem with the more religious wing thinking of breaking off in light of changes to the party. If the national religious camp turns on Bennett, who has made a concerted effort to court secular minded voters, we could be seeing a dreaded double flanking and the party could be in trouble.

It could happen if: Everyone ignores Tekuma (the religious part of the party) in polls and news coverage

Or maybe not: If major rabbinic figures come out against Bennett and Shaked

The two biggest laws are ones that have already been fought about for some time now. The first one deals with the Supreme Court’s authority to overturn legislation. Recently, the Knesset has had a series of laws rejected by the court such as one dealing with African migrants/refugees and another that could eliminate the Israeli citizenship for members of Hamas. In general, Kulanu has opposed limiting the courts power, but the coalition is trying to work on a deal with them. In addition to the courts, there is a nationalism law of which there are a few versions. The bill would enshrine Hebrew as the national language of Israel, declare Israel to be officially a Jewish country, raise the status of Jewish Law, to protect holy places of all faiths in Israel and make the Law of Return a Basic Law among other things. However, some coalition members are opposed to aspects of the bill making it harder to pass.  In the meantime, look for more articles declaring the end of democracy in Israel, others insisting that those who oppose the bill are among the most dreadful scum in the universe and everything in between. And when you see those, make sure to come back to Kalpi for a dose of sensibility.